I’ve long been a fan of Jenny Holzer’s art, dealing with text, originally printed as photostat, but later displayed on billboards, in Times Square on the big screen (pictured) and later projected in huge letters on buildings. The idea of presenting ones ideas, or as in this case, declared maxims for her Trusims. I can’t recall where i first came across this piece, but I love reading through them all, with the one “abuse of power comes as no surprise” being my favorite. Even after I forgot about this piece, I never forgot that line and thought of it often. I mean think about it, does that ever not happen? She’s an American artist, born in 1950 in Ohio, who started using text as her primary means in the late 70s. An original version of the piece is now part of The Museum of Modern Art (MoMA) in New York, and they described it as “…her pithy, ironic, and often disturbing statements have been presented on posters, T-shirts, baseball caps, and a flashing screen in Times Square, New York.” 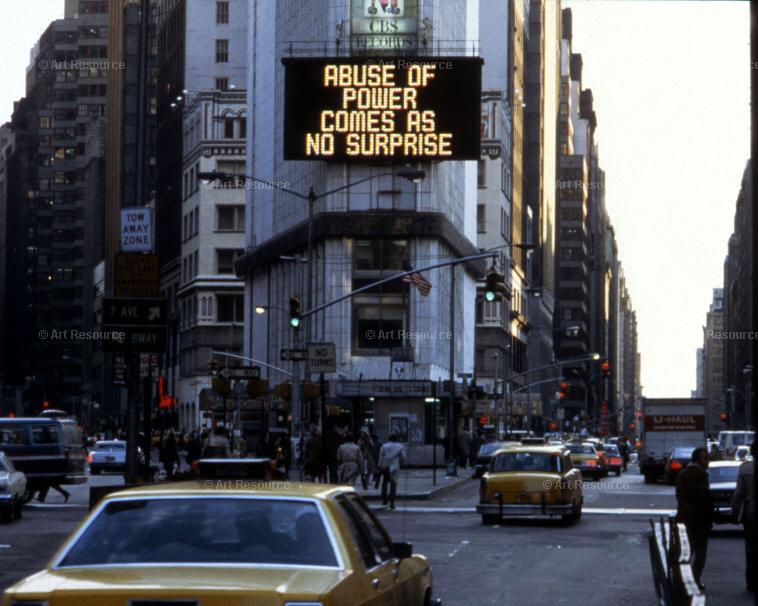 Holzer began creating these works in 1977, when she was a student in an independent study program. She hand-typed numerous “one liners,” or ”Truisms”, which she has likened, partly in jest, to a “Jenny Holzer’s Reader’s Digest version of Western and Eastern thought.” She typeset the sentences in alphabetical order and printed them inexpensively, using commercial printing processes. She then distributed the sheets at random and pasted them up as posters around the city. Her Truisms eventually adorned a variety of formats, including T-shirts and baseball caps.

Assuming she won’t mind me adding to the way she displays, so I found a version of her text online and present it here, reading through them again now brought a smile to my face more than a few times.